Breathe the Air of Eden Once Again. 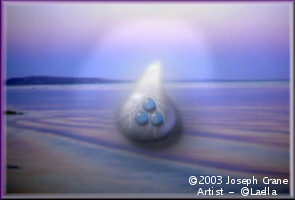 In the beginning life on this planet began as small organisms that multiplied over millions of years. They flourished over time and came together to form viruses and bacteria, which were the only life on the earth. Then something happened to them, they began to die. Not from old age but from a poison so terrible it killed most of the bacteria and virus. This poison was oxygen and it is still poisonous to viruses today. I find it odd that viruses were the first things to inhabit the earth and when the oxygen content of the earth grew it killed them off. Here we are now living in a world where we are depleting the oxygen; the viruses are coming back to live in the oxygen depleted areas of our body and are beginning to kill us. We are polluting the air with gasses and waste products that cut down on the amount oxygen we breath in from the atmosphere. If that isn’t enough the forests of the world have been devastated over the centuries and the last great forest in the Amazon is being cut down to deprive use of more oxygen. Just a few 100 of years have passed and we are now 40% more polluted then we were when the Declaration of Independence was signed. At that time the earth was about 20% oxygen and now in the big cities that percentage is down to about 10%. Funny thing is a world of viruses was destroyed by oxygen and now we are destroying the oxygen levels and the viruses are back. AIDS, cancer and a host of others have gotten a foothold and are growing. (There is research that has shown where cancer could be caused from a virus.) The air we breath is getting to a point where there isn’t enough oxygen to fend off these things.

Modern science is doing what they can by producing drugs to kill these things. However, did you know pharmaceuticals are the fourth cause of death in this country and it is again the fourth reason for hospitalization? What is wrong with this picture and what can be done about it?

Oxygen has long been known as a healer in its self. Dr Otto Warburg won a Nobel Prize twice, once in 1931 and again in 1944 and was nominated for a third. Dr Warburg proved over 72 years ago that cancer couldn’t survive in an oxygen rich environment. His research over the years has opened the door for many oxygen therapies now in use today. (Mostly in other countries.)

The CLO-3 Drops were developed to assist in oxygenating the body for use with the O3 zone tuning fork. I have used the O3 fork to manipulate the oxygen in the body to make an ozone concentrate in a specific area of the body to promote healing. It occurred to me there must be a better way of doing this. If I could come up with an extra-added source of oxygen then I could draw from that. After much research into this I came up with a way to add the extra oxygen to the body that would benefit both the body processes and the vibrational tuning process.

In the making of Cosmic Lightning Oxygen Drops, blessings are done as it is made along with a blessing being placed on each bottle. The four-step process starts with the purest of waters, which is blessed, then restructured with a laminar crystal process.

This restructuring changes the stricture of the water to dew, which is lighter water then regular water. Next the water is blessed again and transformed into what is called Cosmic water. Cosmic water has been tested on a Bovis scale, which is a scale that measures life force. On the Bovis scale a human body, at its minimum levels for health, ranges from 8,000 to 10,000. Tap water or bottled water only ranges from 2,000 to 5,000 Bovis. Cosmic water has a Bovis scale from about 4,000,000 to an immeasurable amount of life force. Finally, the water is blessed again and Food Grade Hydrogen Peroxide is blended into it to make a 9% solution. A final blessing is said after it is completed and then it is tuned to the frequency of the O3 Zone tuning fork. In a study we conducted with blessed water, it was found the blessed water enters the cells in the body 5 times faster then water you can buy in the store. This is the complete procedure of creating these wonderful oxygenating drops.

The Cosmic Lightning O-3 Drops 9% solution is again diluted into your drinking water depending upon the way you intend to use it. Below are a few uses and the recommended dilution procedures depending on your needs.

Oxygenating the body for better health is a simple matter of adding 5 to 11 drops of CLO-3 Drops to 8oz of water or juice twice a day depending on each individual. Begin using CLO-3 with 5 drops in the 8 oz of water or juice, taking it on an empty stomach. If your stomach is not upset increase the dose to 6 drops the next day and one drop a day until you reach 11 drops twice a day. If at any time while increasing the drops your stomach is upset hold at that number of drops until the dosage no longer upsets your stomach. After that increase the drops one at a time until you reach 11 drops twice a day. It is not necessary to exceed 22 drops a day.

It is recommended that your Cosmic Lightning O-3 Drops be stored in a cool, dark place. Or refrigerate.